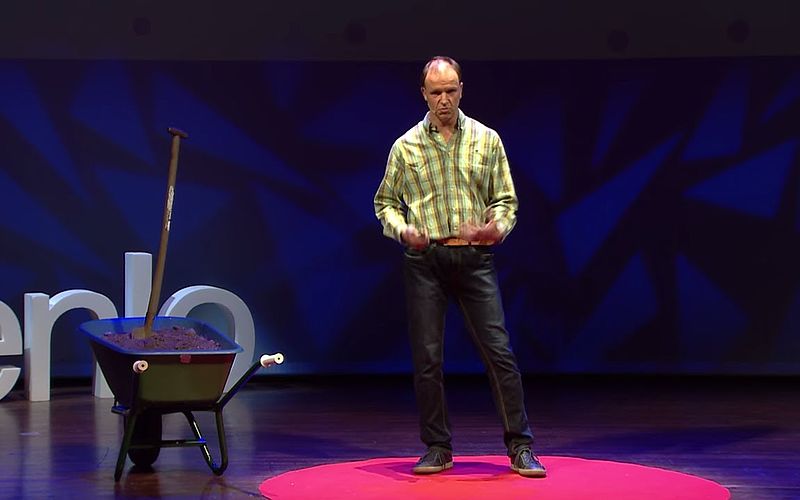 15 Oct 2017 Esther Klein
Philippe van der Grinten has one goal: to restore our soils and make them healthy and thriving again. TEDxVenlo is the stage where he will show people what we can do by ourselves and accomplish if we go for his solution and adopt it. “A healthy soil will produce healthy nutrition.” He will reveal how during his talk on November 7th.

Something to say
Giving a talk - a monologue even - is not what the former shepherd and passionate saxophonist normally does. “I choose to do this because I want to share this opportunity. It is absolutely an idea worth spreading.”

Natural problem approach
His whole life, Philippe has been occupied by agriculture and animal husbandry. He lived and worked in Costa Rica, Guatemala, Nepal and Bolivia for the UN, but it was when he returned to Venlo that his interest for a healthy soil was raised. It all began with shepherds who always approached agricultural problems in a more natural way. They believe that less chemicals can be used in agriculture. Philippe wholeheartedly embraced that idea, deepened his knowledge and found solutions.

Solution for everybody
“With Bokashi,” he proclaims, “we can all contribute to healthier soils: professionals, as well as public authorities and private people. My solution is both for agriculture and  citizens and can be used in flower- and vegetable gardens. Everyone can benefit from a flourishing soil.”

Large investment?
Do we have to invest a lot in order to have better soils? How much effort goes into it? “It’s extremely easy and cost effective,” Philippe assures us. “And because of all additional benefits of a living soil, I feel everybody should contribute to a healthier planet.”

Talk about it
Philippe has received a lot of positive comments when telling people he will give a talk at TEDxVenlo. “If you want to reach a certain goal you have to make it known first. TEDx is a good platform to spread my idea.” That’s why Philippe has a goal on November 7th.  “When people leave the theater, they will know what Bokashi is and will be talking about it, starting in the foyer.”

Previous
Frankie Dickens will open your eyes about refugees at TEDxVenlo